Heartbreaking. Horrific. Eye opening. Breathtaking.
All of these and more describe this beautifully written story that follows the journey of 2 women as their beloved Afghanistan, rich in history and culture, is embroiled in war, destruction and a struggle to be reborn. 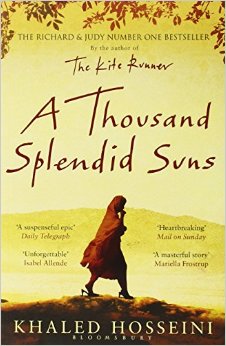 This is a work of fiction which is beautifully woven using many threads of both harsh and loving reality. I cannot believe that it could be possible for any reader to get through this book without shedding a tear. I shed many.

It is about the collision of the life-paths of two women who come from very different family backgrounds, but become the wives of the same, cruel husband in Kabul. They form an unlikely, strong, and loving, alliance.

The story takes us through over three decades of recent Afghan history, through the many ruling regimes and conflicts during those times, and the consequences of what is termed as collateral damage suffered by many during the battles between the many factions involved.

“One could not count the moons that shimmer on her roofs, or the thousand splendid suns that hide behind her walls.”

I honestly feel like no review I could ever write would do this book justice. I loved every single page of it, I read this in a single seating and finished reading it at 4 in the morning, um yes because I simply couldnt put it down.

The theme of A Thousand Splendid Suns revolves around family, friendship, love, sacrifice and violence. This book was split into four parts: The first part was about Mariam, an illigitemate child who lived on the outskirts of Herat with her bitter mother. A series of unfortunate events faced by Mariam were heart-wrenching and indescribably painful. The second part was about Laila, who lived down the street from Mariam and her husband (yes, forced marriage). Laila character was completely different from Mariam. She’s an educated girl, cheerful, outspoken and brave. The relationship between Mariam and Laila became intertwined in the third part. This part also depicts the conditions during the Taliban reign, who has risen to power and imposed so-called Islamic rules on the Afghan population; prohibiting women from appearing in public without a male relative, girls banned from going to school, the destruction of all types of entertainment and arts, the burning of books except for Quran and so forth. The last part shows the condition of post-Taliban reign from Laila’s perspective (Ha mana Maryam? Heheh)

I liked how Hosseini draws the picture of each and every scene to the extent that you feel that you’re there. I’ve created a mental image of everyone in the story, and the violence is truly devastating. At the same time, this book is also beautiful, it pulled me in from the first page. Mariam and Laila’s stories were both so compelling on their own, and when they came together, the threads of the story became even more intricate and powerful. I felt so much for these characters after everything they had been through and I desperately wanted them to be happy.

Overall, it was such a gripping tale, highly recommended.

“Love was a damaging mistake, and its accomplice, hope, a treacherous illusion. And whenever those twin poisonous flowers began to sprout in the parched land of that field, Mariam uprooted them. She uprooted them and ditched them before they took hold,”