My Story is one of the most popular and controversial autobiographies by an Indian author.Kamala Das has a deft and confident writing style with powerfully effective use of imagery. 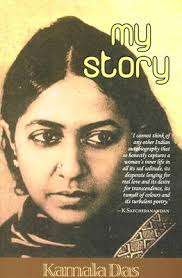 Disturbing, poignant and tugging all at the same time – My Story is chapters from real life of Kamala Das.
Bold, provocative,flamboyant, and controversial are some of the words that are associated with the writer. There is no denying that Das ruffled several feathers by converting to Islam at the age of 65;or by making several dents in the mound society had set for women in the 1960s. She wrote about love that was amorous, frank and devoid of compunction at a time when poets/writers, especially women, were expected to romanticize all matters of the heart.
Born with skin not so fair–a dusky complexion to be precise, Kamala portrays herself as an inquisitive child who faced the triggers of race especially when India was gripped by the British imperialists. Brought up in convent schools Kamala faced discrimination at an early age when the word “racism” probably did not enter her vocabulary. Struggling through her life a midst the parochial, patriarchal society, Kamala had to submit when she had to marry an almost brutal man against her wish, that too, at the tender age of sixteen.
Kamala makes an attempt to find happiness in the world of her own–the world inhabited by the muses of literature enabling her in poetic and prosaic compositions. It will be wrong to say that she found bliss only in the world of creation. This is because, frustrated and exasperated by husband’s treatment and doomed in an unhappy marital bond, Kamala determines herself not to be tied up by the established norms of Indian society.
The novel also predominates with the metaphor of disease and sickness that she herself undergoes, along with her eldest who seem to be a chronic patient, falling prey to the tentacles of grave diseases fearing impending death but miraculously surviving with care and treatment. The symbols of illness is a portrayal of aberration in her life–a life that is devoid of peace and tranquility, a life that is forever rocking in the sea of turbulence, seeking an anchor but finding none, strives to stay afloat in those disturbed waters of turmoil and trepidation.

Kamala Das has been a controversial figure. After agreeing to the fact that ‘My Story’ is her autobiography, she later called some chapters as mere outburst of her imagination.

Quote from My Story:

“Today at Nariman Point the tall buildings crowd one another. But when I was young and in love with a grey-eyed man it was a marshy waste. We used to walk aimlessly along the quiet Panday Road or cross the Cuffe Parade to walk towards the sun. We did not have a place to rest. But in the glow of those evening suns, we felt that we were Gods who had lost their way and had strayed into an unkind planet..”