A lyrical, mysterious tale of misunderstanding and pain, echoing through the years. At its dark heart, it demonstrates how wall engulfed places can have multiple and major consequences, meaning that everything can change in a single day 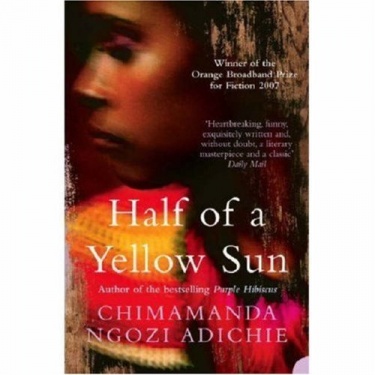 The world has to know the truth of what is happening because they simply cannot remain silent while we die. – Chimamanda Ngozi Adichie

Chimamanda ‘s novel illuminates the reality and disintegration of Nigerian life in wartime during the 1960s. The Biafran war waged between 1967-70 was Nigeria’s politically and ethnically charged battle of North vs. south, specifically the south eastern region, where the unsuccessful fight for secession left 1 million civilians dead. Half of a yellow sun describes the Biafran flag; it symbolized the struggle of its people for independence and a brighter tomorrow.

Red was the blood of the siblings massacred in the North, black was for mourning them, green was for the prosperity Biafra would have, and, finally, the half of a yellow sun stood for the glorious future.

The novel features the daily lives of Igbo people of different social levels from the well educated and bourgeois to illiterate country peasants. Adichie’s characters are strongly defined individuals whose personal lives and interrelationships go through fragmentation and change, their rise and fall in violent tandem with the country’s horrific civil war.

There are some things that are so unforgivable that they make other things easily forgivable..

Although the story centres on the love-hate conflict between twin sisters Olanna and Kianene, moving from jealousy, betrayal, and distrust, the more compelling tale belonged to Ugwu – the good natured, loyal houseboy – who rose up through better education, but miserably fell when, conscripted in the army, his vicious regrettable action would leave him self-loathing, morally decayed and damaged forever.

This was the most visceral war novel I’ve read in a while, on a region not well known to me. Adichie’s voice is powerful, genuine, resonant in the narrative of Biafra’s painful victory and defeat; in the story of the resulting broken lives, and a country’s blood -soaked odyssey.

3 thoughts on “Half of a Yellow Sun”