A House in the Sky is the compelling account of the then-27-year-old Canadian’s 15 months in brutal captivity as a hostage, along with Australian photographer Nigel Brennan, at the time her former lover. 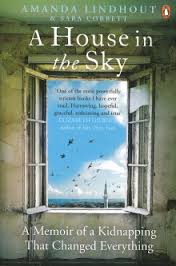 The dramatic and redemptive memoir of a woman whose curiosity led her to the world’s most beautiful and remote places, its most imperiled and perilous countries, and then into fifteen months of harrowing captivity—an exquisitely written story of courage, resilience, and grace.

Written with writer Sara Corbett, an experienced journalist and talented wordsmith, the book is a wrenching and often difficult description not only of the beatings, rapes and torture her captors inflicted upon Lindhout, but also of the incredible strength and resilience she exhibited during her imprisonment, and after.
Nobody instructed the young journalist to visit Somalia in the middle of a civil war. No editors demanded her coverage; her only steady job when she landed in Mogadishu was a regular column for the Red Deer Advocate, a small newspaper in central Alberta. When news broke that a 27-year-old freelancer had been kidnapped, some veteran correspondents asked each other why the rookie threw herself into such danger.
Held hostage for 460 days, Amanda converts to Islam as a survival tactic, receives “wife lessons” from one of her captors, and risks a daring escape. Moved between a series of abandoned houses in the desert, she survives on memory—every lush detail of the world she experienced in her life before captivity—and on strategy, fortitude, and hope. When she is most desperate, she visits a house in the sky, high above the woman kept in chains, in the dark, being tortured.

Today, Lindhout struggles with nightmares, sometimes wondering if she’s still in Somalia when she wakes up, fighting her fear of men and of closed spaces. Yet, since her release, she’s founded the Global Enrichment Foundation, a non-profit that supports Somalian and Kenyan women who need help and education. She has even returned to Somalia, moderating a panel in which a former Somali militant participated.